A priceless jewel, given its history

Meghan Markle and Prince Harry looked dashing in their latest official photo, and we couldn't help but notice one of the accessories the Duchess of Sussex was wearing in it: an old watch of Princess Diana's that her husband gave her. 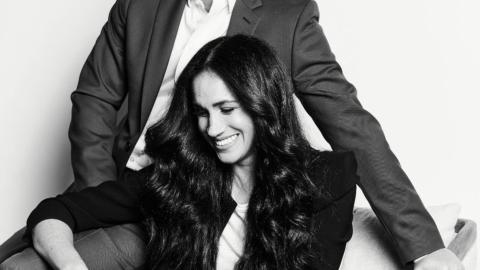 For several years, the world has been following and scrutinizing Meghan Markle and Prince Harry's every move. Since they announced that they planned to distance themselves from the British royal family, Archie's parents have been the talk of the town. The Megxit announcement was like a bombshell and, from the looks of it, the crown still hasn't forgiven the pair for it, as evidenced by Harry's latest punishment: not being included in the royal family's Remembrance Sunday service. However, Meghan Markle and her husband are now independent and have managed to join a number of causes they hold dear. In fact, on Friday, October 16th, the actress of Suits fame was photographed with Prince Harry, wearing a family heirloom that once belonged to Princess Diana on her wrist.

In the black and white shot published by TIME, Archie's mother is seen glowing with happiness alongside her husband, who has a protective arm around her. Meghan Markle was wearing her favorite Alexander McQueen suit, as well as hundreds of thousands of pounds worth of jewelry, including her engagement ring worth £270,000 and a Cartier watch that belonged to her late mother-in-law, Diana. The watch, a gift from Harry, was worth about £18,000 at the time, but it's probably worth a lot more now, given its history. Princess Diana was seen wearing it on several occasions in 1997.

A gift from Harry

This official photo of Meghan Markle and Prince Harry was released to announce an upcoming public appearance. On October 20th, Archie’s parents will be hosting a special edition of TIME100 Talks, TIME’s virtual conversation series. TIME partnered with P&G to present the episode, titled 'Engineering a Better World.' It is expected to reflect a fundamental element of the Duke and Duchess's nonprofit organization, namely creating more compassionate, trustworthy, and safe online communities.