Does your dog always give you puppy dog eyes? Well it turns out they’re master manipulators! Find out more about this dizzying scientific feature they have developed below!

Dogs are a man’s best friend and in order to stay that way, they have developed quite a specific technique to keep them on our good side…

It’s all about the muscles

This scientific discovery has allowed us to learn more about our loyal, four-legged companions. The proceedings of the National Academy of Sciences of the United States of America have just identified a unique feature in dogs.

According to them, centuries of domestication have alloweddogs to develop small muscles in their eyebrows whose only function is to draw in humans using an irresistible charm, by making their faces more easily readable for us. This little anatomic detail is positioned precisely to raise the inner brow.And that’s how they win us over!

Scientists compared this detail in dogs with wolves and found that only dogs have these muscles because they need them in order to look cute to us. Wolves aren’t actually able to pull the same soulful expression that we know so well. Known as 'puppy dog eyes,' dogs developed them in order to be able to communicate with us.

Back in the day, these little muscles didn’t exist but were instead developed as time went on; their bodies adapted to a dog’s lifestyle and our daily lives. 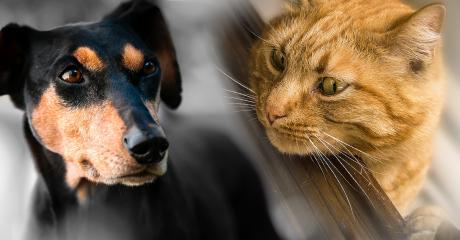 Cats Vs. Dogs: Science Has Confirmed Which One Is Smarter