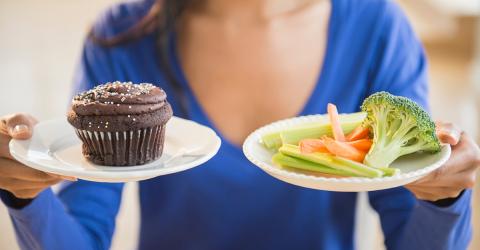 By comparing a part of a genome of thousands of individuals, scientists have managed to break through some of the secrets behind staying thin whilst eating anything one's heart desires. As it turns out, naturally slender people do happen to be lucky in the genetic department which seems to help in keeping their pounds off.

Some might say that this is an outright injustice and a simply unbearable and incomprehensible difference in treatment when it comes to staying naturaly slim. While some struggle desperately to shed the extra pounds, others who are fortunate enough to get away with eating anything without counting their calories. Published in the PLOS Genetics, researchers have now conducted a study which works to explain this mysterious (and annoying) metabolic aberration.

As one might have expected, the reasons behind this surprising propensity for thinness are partially genetic. This means that people who are 'immune' to being overweight benefit from the lack of a small group of genes related to obesity: "This research shows for the first time that healthy thin people are generally thin because they have a lower burden of genes that increase a person's chances of being overweight," explains Sadaf Farooqi, professor at the Institute of Metabolic Science in University of Cambridge, "Not because they are morally superior, as some people like to suggest," she adds.

To reach this conclusion, the researchers at Cambridge University compared the genetic makeup of a large cohort: more than 1,600 thin people, nearly 2,000 suffering from obesity, and some 10,400 people of a weight considered 'average' - the control group. During the study, participants had to complete a questionnaire about their lifestyle and eating habits.

The scientists were able to calculate the ‘genetic risk score’ of each participant. As a result, those who were categorised as obese have proven to be far more at risk with regard to their genetics, compared to their counterparts whose weight is deemed average and slim.

"The genetic dice are loaded against them [obese people]," continues another member of the scientific team, Professor Inês Barroso from the Wellcome Sanger Institute. Far from claiming that the genome is the only one responsible for the injustice of thinness, the researchers are anxious to exonerate obese people of the charges they are sometimes wrongly accused of.

"It's easy to rush to judgement and criticise people for their weight, but the science shows that things are far more complex. We have far less control over our weight than we might wish to think," pitched in Professor Farooqi, whose discoveries seem to offer a better understanding for all those who struggle with being overweight.

If we can find the genes that prevent them from putting on weight, we may be able to target those genes to find new weight loss strategies and help people who do not have this advantage." concludes Farooqi. Something that might finally tip the scales... those that lay uselessly in our bathrooms, but more so those concerned with metabolic justice!

#weight loss#viral
Contact
To ensure that we can best respond to your question, please choose your desired department
No connection
Check your settings