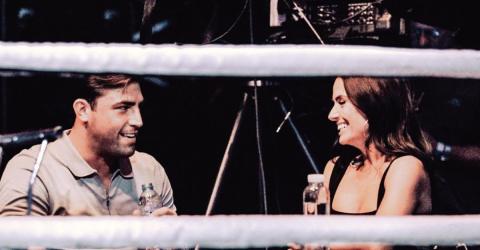 After winning Love Island 2018 with then-girlfriend Dani Dyer a year and a half ago, Jack Fincham seemed to be all set for a full-on reality TV star career. However, the former pen salesman and Essex native has announced that he’s going to be making a huge career change…

Love Island winner Jack Fincham has announced that he’s starting a new career – as a professional boxer! The 28-year-old first rose to fame when he wooed Dani Dyer on Love Island in the summer of 2018 but he says he’s now keen to move on from reality TV and get back into what he really loves.

Jack is hoping to capitalise on the success of social-media-famous boxers like KSI (whose real name is Olajide William Olatunji) and Logan Paul – who’ve managed to transform their Youtube fame into extremely lucrative professional boxing careers. KSI and Logan Paul reportedly earnt $900,000 apiece for their November bout in Los Angeles – which was won by KSI.

Jack told The Sun: ‘I think this would be a good time because boxing is going that way where everyone is interested in it. With the YouTubers boxing it opens up the sport to people who wouldn't usually watch boxing. You’ve got to think, you had Billy Joe Saunders boxing on the undercard, and all these kids who follow the YouTubers they’ve got a massive audience they now know who Billy Joe Saunders is - one of Britain’s best boxers.’

However, Jack is keen to point out that he’s not a complete newbie to the sport – as he’s been training as a boxer since the age of 14. Earlier this year, Jack stunned fans with his ‘revenge bod’ transformation following his split from Dani Dyer and in September he revealed he was back in boxing training.

Acknowledging he’ll be subject to criticism, Jack told The Sun: ‘I’m 100 per cent going to get the people that say ‘You’re only doing it for this…’ but getting to come to events and being around the shows it reignites your passion for it… For me I think this is just a great time for boxing, so why am I any different? And, in fact I’ve had enough bouts to turn over anyway.’