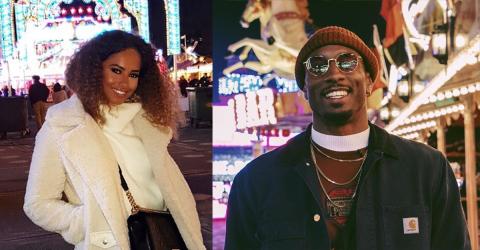 After sending fans wild with some pictures that seemed to suggest she and basketball player Ovie Soko might be getting together, Amber Gill has set the record straight about the romance rumours.

She may have won Love Island 2019, but it wasn't long before Amber Gill found herself single once again, as her relationship with Irishman Greg O'Shea ended just weeks after they left the villa.

They may not have romantically coupled up whilst in the villa but many viewers were hoping for Amber to get with fan favourite Ovie Soko on the show - and now that he's split from India Reynolds, many thought a relationship could be on the cards between him and Amber.

This week, both Amber and Ovie shared a series of beaming photos from Hyde Park's Winter Wonderland - aka the dreamiest Christmassy date destination in London - although neither revealed who they were there with. Fans were quick to put two and two together and guess the pair were secretly on a date.

However, there's bad news for those of us rooting for Amvie (or should that be Ovber?!) as Amber seems to have squashed the rumours in a new interview in which she claims not to have any time for romance nowadays.

Speaking to The Daily Star On Sunday, Amber denied rumours of a new romance, saying: 'I haven’t got time for it. And I don’t want to take the shine off what I’m doing because it really is an amazing opportunity.'

She also had a pretty decisive answer to whether she and Ovie could ever be a thing - check out the video above for more!