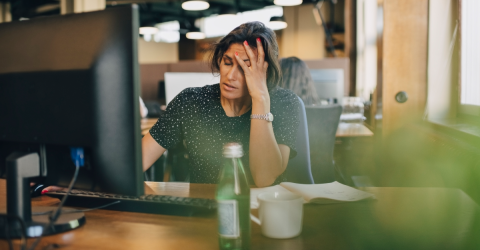 Spasmophilia is a syndrome involving several symptoms all related to a severe state of anxiety, it also could be evidence of an ionic imbalance in the blood.

Spasmophilia may be something you've never heard of, but it can be a very serious condition. It is a syndrome that has several symptoms related to a state of anxiety. It manifests itself through hyperventilation and neuromuscular hyper-excitability. This is a controversial concept that is not universally recognized.

Spasmophilia works through the appearance of crises that resemble anxiety attacks. Currently, it affects more women than men, and mainly people aged between 15 and 45.

Spasmophilia is defined by several symptoms related to anxiety. The first is hyperventilation, which is an acceleration of the respiratory rhythm. This results in a feeling of tightness, jerky breathing and a need to find air.

There is also muscle tetany that is manifested by tingling, numbness, cramps or an intense and painful contraction of muscles resulting in a curl of the hand ("obstetrician hand") or foot or even difficulties opening the mouth. A person will usually experience asthenia (intense fatigue, especially when waking up), either physical or intellectual.

The mechanisms of spasmophilia are rather vague. It is believed to be a disproportionate reaction to a stressful or anxious situation. This fear causes the appearance of symptoms that, themselves, will fuel fear. In turn this is referred to as the vicious circle.

Another hypothesis is that spasmophilia is explained by a chronic lack of magnesium and calcium, which play a role in muscle contraction and the transmission of nerve impulses. This would explain the neuromuscular hyper-excitability.

Sleep disorders that are responsible for asthenia and neurodystonia are also thought to be involved.

Therapy makes it possible to limit or even eliminate the onset of crises. The most used type of therapy is cognitive and behavioral therapy.

In the case of a crisis or anxiety attack, it is important to calm your breathing by breathing in a paper or plastic bag, for example. Similarly, it is recommended to think of something else so as not to fuel the vicious circle.

Drug treatment with antidepressants may also help reduce the frequency of these attacks. However, attention must be paid to side effects and risk of possible dependence.

#viral#stories
Contact
To ensure that we can best respond to your question, please choose your desired department
No connection
Check your settings