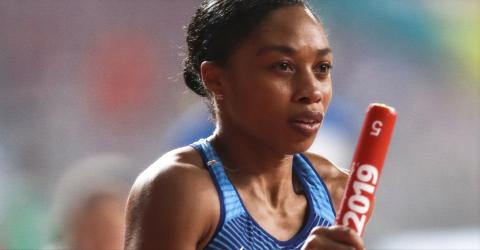 Allyson Felix is an American athlete who is currently competing in the World Track and Field Championships in Doha, Qatar. While she was away for 10 months after giving birth to a little girl, the young woman achieved an incredible feat: she won the 4x400m mixed relay event, the 12th medal of her career.

The athlete also became the first to win 12 medals, surpassing the record set by Usain Bolt, the fastest man in the world, who is now retired.

This new record set by Allyson Felix is all the more incredible since she had just returned to the competition after 10 months of absence. The young woman, pregnant with a little girl, had a difficult time, as her baby was born prematurely. Allyson Felix even had to undergo an emergency cesarean section because of pre-eclampsia, a rare disease that affects pregnant women, and which can often be fatal.

Allyson Felix and her daughter, Camryn

A real fighter, Allyson Felix didn't get discouraged and resumed training, reaching the peak of her career today. ‘It's very important to me. It's been a crazy year for me, so being able to run with my team made me feel so privileged already. I am happy to be healthy and back,’ she told NBC Sports.

Women are coming out in force in Doha

The female athletes present in Doha have been showing that they did not come to take a leisurely walk for their health, quite the contrary. Nia Ali, a compatriot of Allyson Felix, renewed her personal record by winning the 100 metres hurdles (12 seconds and 34 hundredths). Roberta Groner, a top-level athlete who works full-time as an off-court nurse, took sixth place in the marathon held on the first day of competition. Finally, Jamaican Shelly-Ann Fraser-Pryce gave her rivals no chance in the 100 metres. The young woman gave birth to a baby boy in 2017 and managed to stay at the highest level at 32 years of age.

#sports
Contact
To ensure that we can best respond to your question, please choose your desired department
No connection
Check your settings