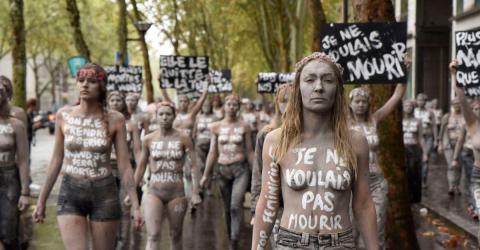 A hundred people belonging to the radical feminist activist group, Femen, were silently wandering the cemetery in Montparnasse in Paris on Saturday 5th October. Their goal was to criticize and protest against violence against women and make the government crackdown on the issue.

‘I left him, he killed me’, ‘I didn’t want to die’, ‘They’ll take me seriously when I’m dead’, ‘Not one more’. These are just some of the messages that could be read on the skin of the Femen activists when they paraded around Paris last Saturday.

With their faces and bodies covered in clay, they each carried black gravestones that were filled with the names of 114 women who had been killed by their partners or ex-partners over the course of this year.

‘@femeninna - A month after the start of the Grenelle debate, mobilization must not falter. Cases of violence against women are not an inevitable truth, but rather a scourge that needs to be wiped out.’

These shocking messages were directed at the government and reveal the public’s opinion on the issue.

‘We want more to be done by the government, judges, the police (…). Every one of us is a potential victim of domestic violence and violence against women’ explained Inna Shevchenko, the leader of this movement, to journalists who were present on the day.

Since Saturday when this protest took place, three more cases of violence against women have been reported in France.