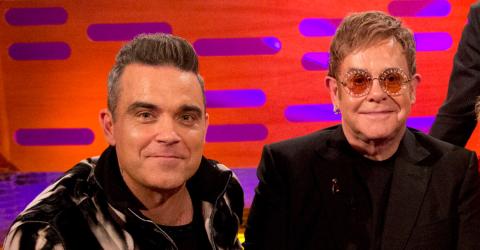 Robbie Williams has had many ups and downs in his life. And it seems the singer owes a lot to one very special person in particular for not having completely fallen off the edge: Elton John.

Robbie Williams now leads a very happy life with his wife, children and dog. But that wasn’t always the case. The star used to struggle with depression and alcohol and drug addiction, which he recently opened up about on a talk show.

After he left Take That, Robbie Williams spent years being the living embodiment of the phrase ‘Sex, Drugs and Rock’n’Roll’. This period of his life took a toll on the singer and he developed quite a bad addiction to drugs and alcohol.

Many people helped Robbie Williams in his struggle to finally overcome his addiction, including superstar Elton John, which Robbie recently confessed on an episode of Friday Night with Jonathan Ross.

When he first decided to get sober, he had a week before going into rehab to start his treatment in which he had planned to record his two hit songs ‘Angels’ and ‘Let Me Entertain You’ for his first solo album entitled ‘Life Thru A Lens’. But on the way to the studio, he played a little drinking game and decided to stop at every pub on the way and drink half a pint of beer in each.

Before Robbie got to the studio, he had already drunk ten beers. While he was in the studio, Williams remembered that Elton John had invited him to his house because he wanted to hear Robbie’s new songs. But when the singer turned up, he was covered in red wine and food stains. Elton was shocked by the condition that the singer was in and decided to immediately intervene.

He wanted to help Robbie Williams and called a doctor and psychiatrist to come to his house and take him into care.

‘I wake up but I haven’t opened my eyes and there’s a knock on my shoulder and I look and there’s… Elton and David Furnish and a doctor and a psychiatrist and they are here to take me away.’

Although this wasn’t the end of Robbie’s addiction story, it was, however, an important step in the right direction that Robbie Williams will probably never forget. Since then, the singer got married to actress Ayda Field in 2010, with whom he now has three children. Check out our video above to find out more about what Robbie has to say about his withdrawal experience.