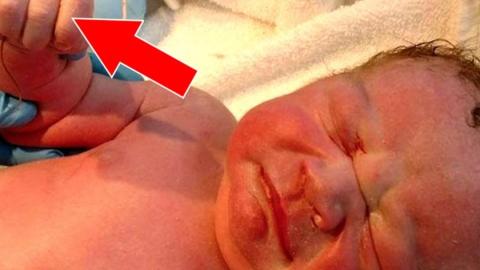 Dexter is a baby who had only a 0.1% chance of being born. He was born holding firmly onto a very unusual object... the very thing that should have stopped him existing.

The contraceptive device that Dexter held firmly in his hand at birth is 99.9% effective. Dexter is part of the 0.1% of babies who have beaten those odds.

Inserted into the uterus, the IUD releases a progestogen hormone that thickens the mucus of the cervix, which prevents the sperm from moving properly and reaching the egg. Despite the presence of the contraceptive, the young Dexter made his way without difficulty.

Her mother, Lucy Hellein, who lives in Texas, discovered that she was pregnant in December, four months after getting the implant. She recounted the unusual birth of her baby in a Facebook post that has already been shared more than 70,000 times.

She explained that she was delighted despite the fact that her pregnancy was unexpected and said with great enthusiasm that Dexter already had great strength.

Check out the video above to see the incredible photos for yourself!