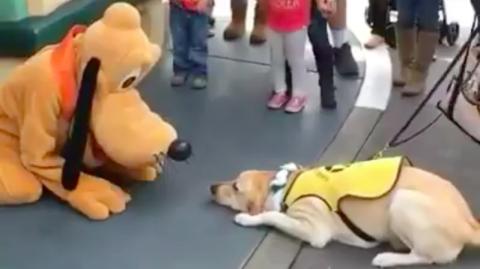 This guide dog saw Pluto at Disneyland and the least we can say is that he is way too cute!

Just like us humans, animals also have their favourite characters. The proof is this adorable dog who is totally in love with Pluto.

On Facebook, Sandy Steinblums says she has been training this young guide dog for several months now.

She took him to Disneyland for socialising because guide dogs must be very sociable and be used to the presence of humans. This is so they can be fully focused on working with their blind master, and nothing around them should break their concentration.

Sandy regularly brings guide dogs to Disneyland to get them used to crowds in order to better prepare them for the hustle of the real world.

In the video, the dog is super happy to see Pluto, Mickey's dog, at the amusement park. Sandy says she took the opportunity to tell him to stay in the ‘down’ position despite his excitement and he managed to do it during the video.

This adorable labrador is still being trained while his excitement is being filmed in front of Pluto. When you see it you can see how much work Sandy has put in!

#disney#dog
Contact
To ensure that we can best respond to your question, please choose your desired department
No connection
Check your settings